People of the Comox Valley,

This past Sunday the 2012 Comox Valley Car Free Sunday took place successfully, with enthusiastic participation from a significant number of Courtenay and Cumberland residents and a variety of businesses. This initiative was organized by the not-for-profit organisation ‘Imagine Comox Valley’ and enthusiastic community partners and sponsors. Everyone in attendance, including volunteers, musicians, families, vendors and artists, enjoyed the positive atmosphere. Many expressed what a joy it was to be able to celebrate our streets in a ‘people-oriented’ way, which was encouraged in the form of music, dance, sports, visual art and play. 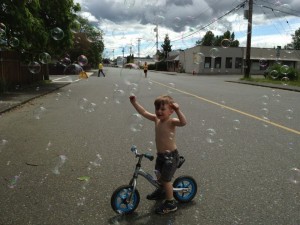 “The celebration of public spaces and their role in contributing to the vibrancy and livability of a community is a key goal of Car Free events around the world”, says Nancy Hofer, Courtenay route-activity coordinator. “Car Free events are a world-wide phenomenon intended to raise awareness of the multiple users of our streets. We as a society spend a lot publicly on our road infrastructure but not everyone agrees with the prioritization of automobiles above other transportation modes. For many, an event like this is a chance to explore an alternative vision and make a statement about what is important to them in their community.” In keeping with this sentiment the Comox Valley collaborated with the people organising the Car Free event in Vancouver (http://www.carfreevancouver.org) to establish some solidarity in this movement.

Imagine Comox Valley (ICV) spearheaded the event by organizing the road closure permit process. “We mainly take care of arranging the permit, insurance and marketing, the community groups and businesses do the rest by coming out and using the streets in ways that inspire them,” states Andrew Gower, of Imagine Comox Valley. “Car Free Sunday is not Anti-car”, Gower stresses, “it is a day to acknowledge positive alternatives and encourage dialogue in a creative way. Many of us volunteers use cars regularly, but would also like to have more viable options for getting around, including for our children.”

Imagine Comox Valley fully intends to make the event an annual one, following the strategy of communities like Kelowna, Winnipeg, Ottawa, Montreal and St. John’s. “We can only make this event better in the future,” says David Frisch, Volunteer Coordinator. “We have received a lot of feedback and will be doing everything we can to make Car Free Sunday more fun for 2013. And it would be nice to not have to rely on so many volunteers. We want to ensure everyone gets a chance to enjoy the event – that’s the whole point!”

The organisers have received feedback that suggests a smaller route may be more effective in Courtenay, both in facilitating road closures and condensing activities and participation from community groups, and will take this into strong consideration when planning for next year’s event. From Cumberland the feedback was that an alternative date may be more conducive to participation, as the village was winding down from multiple bicycle-related events.

In Courtenay things kicked off at noon with a 3km fun run, some Comox Valley Kickers road rugby at 16th and Fitzgerald, street-skiing, garage sales at MvPhee and Cumberland Road, street dining from Union Street Grill and Grotto and a whole lot more. With an almost constant stream of people in the downtown core area, the sight on 5th Street was something to behold. Around 4 pm things started getting more quiet and the organisers began the volunteer appreciation events in and around the Zen Zero parking lot, featuring donated refreshments and snacks by Heavenly Goodies and live music organised by Lightburn Productions. 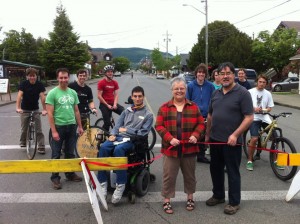 Mayor Leslie Baird along with Councillors Roger Kishi and Connor Copeman Tie the Ribbon to close the street and open the event.

The Village of Cumberland marked Car Free Sunday with their own twist – as they often do. Residents celebrated their love of their bikes as part of Bike Month in Cumberland with a family bike festival and neighbourhood party. A rousing game of bike polo rolled for the whole afternoon – and was played mostly by folks who had spent hours on their seats at 12 Hours of Cumberland Race on Saturday. VAST led a wonderful participatory street art project in the middle of the intersection at 3rd & Dunsmuir; volunteers offered a Bike Safety Rodeo to hone the skills of wee bikers and then the kids all decorated their bikes and had a parade down the middle of the road. It was a laid back day on wheels for Cumberland, and the Village looks forward to more community building events like it.

The organisers would like to express their deepest gratitude to everyone who volunteered their time to assist with directing traffic and making it possible for everyone to enjoy the event safely. Also to the generous sponsors whose contributions made the event possible and to the local governing bodies for their support and assistance. Finally, to each and every person who came out to enjoy the day with other members of our community, told a friend about it, posted a note online, shared a picture or simply just supported the idea in principle - every bit contributed to another successful Comox Valley Car Free Sunday, cementing this as an annual occurrence.

If you want to be a part of Car Free Sunday 2013, you can get involved by:

The organisers are looking forward to working with their community on the 2013 Annual Comox Valley Car Free Sunday and would be happy to provide anyone interested with additional information or answer any questions. They can be reached via e-mail at imaginecomoxvalley@gmail.com.

(Comox Valley Record - June 6, 2012) After recent presentations to both Courtenay and Cumberland councils, the 2012 Comox Valley Car Free Sunday has been approved to proceed June 17 from noon to 5 in these two communities.

This initiative is organized by the not-for-profit organization Imagine Comox Valley and enthusiastic community partners and sponsors.

Car Free Sundays are organized all over the world as a way to bring communities together in the roads and streets of our cities, towns and villages. This year, the Comox Valley will collaborate with the people organizing the Car Free event in Vancouver (www.carfreevancouver.org) to establish some solidarity in this movement. Roads and streets are a key part of our community infrastructure. Everyone pays for them, but only some people use them on a daily basis. Car Free Sundays help to demonstrate various alternative uses of this great community resource.

Road closures are set to take place in downtown Courtenay and Cumberland to facilitate activities including everything from live music to a bicycle rodeo and more. The Courtenay route will be the same as last year, with the Cumberland closure confined to Dunsmuir Avenue from First to Fourth streets) and a small section of Second Street. Street closures will be limited and residents and businesses will be given alternative routes. Organizers are committed to ensuring the community has safe alternate routes, professional signage, clear communication about the event and trained volunteers who can assist people on the day of the event.

An event like Car Free Sunday requires community support and engagement, and organizers are actively looking for volunteers for the event. If you want to be a part of Car Free Sunday 2012, you can get involved by:

Please note that organizers welcome new ideas and will do their best to incorporate any reasonable requests.

Organizers are looking forward to working with their community on the 2012 Comox Valley Car Free Sunday and would be happy to provide anyone interested with additional information or answer any questions. They can be reached via e-mail at imaginecomoxvalley@gmail.com.

For more, visit www.imaginecomoxvalley.ca or see the group’s Facebook page.