Go Smart Day is a grass roots festival organized by Image Comox Valley. It’s purpose is to build a stronger community by developing and supporting more efficient use of its resources. Specifically, the Festival encourages the community to explore alternative modes of transportation and use of public space. Generally, Go Smart Day supports healthier lifestyles in other areas such as housing, economic development, food production and supply, and healthcare. 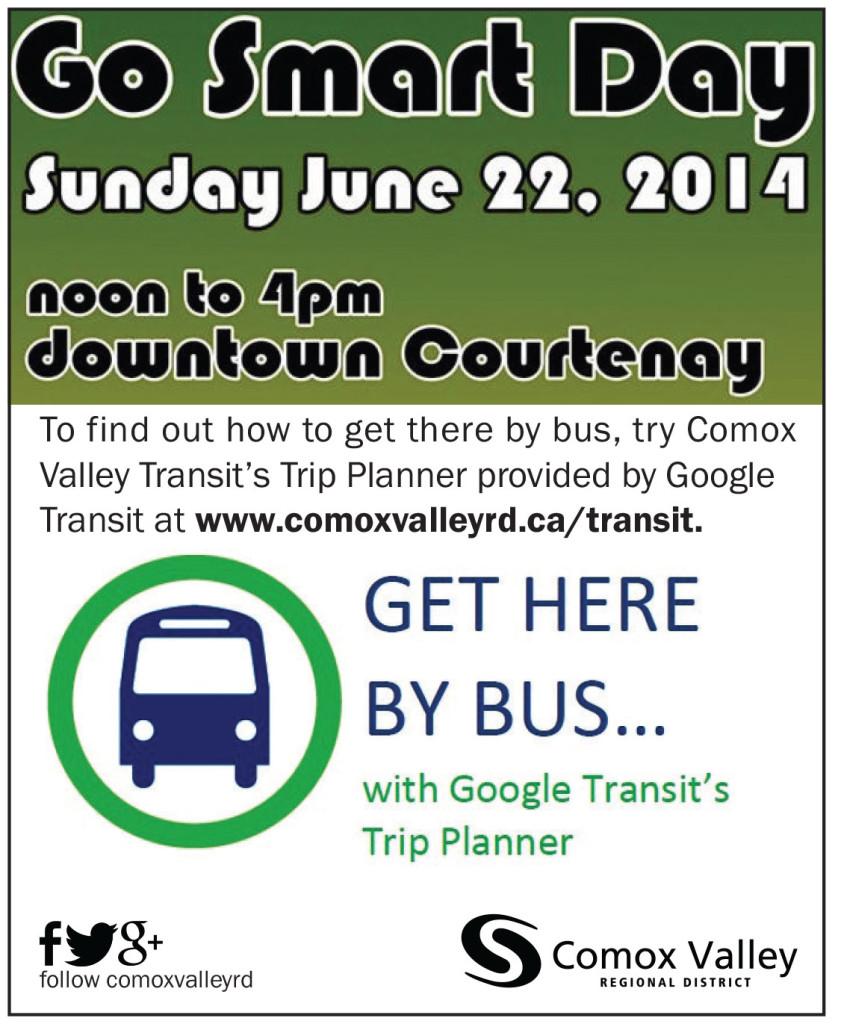 Citing research and tangible examples, Peñalosa explained how communities built around the automobile discourage active forms of transportation, contribute to the trend in North American obesity and other negative public health outcomes, create unsafe spaces for people, including vulnerable users such as children and seniors, create sprawling land use patterns and associated expensive infrastructure, as well as exercise a heavy toll on the environment.

Imagine Comox Valley was inspired by the tangible examples of the creative use of public space and initiated the Valley’s first and second Car Free Sundays as one of the identified “easy actions” recommended out of Peñalosa’s visit.

“In most communities, roads are our most expansive and expensive public space,” says Andrew Gower, board director of Imagine Comox Valley. “Imagine Comox Valley (ICV) saw an opportunity to host a Car Free Sunday as a tried and true event to raise awareness about our collective vision for these spaces and to physically bring people together. It was a lot of fun, we literally had people dancing in the streets!”

Car Free Sundays were held in both Courtenay and Cumberland in the fall of 2011 and again in the spring of 2012. The events inspired live music, chalk art, tango in the streets, stilt walkers, community booths, skateboard demos, garage sales, store specials, roller derby demos, restaurant deals and many other initiatives. While ICV spearheaded the event by organizing the road closure permit process, the event was community-driven and was successful due to the participation of numerous businesses, sports groups, artists and musicians, community animators and organizations.

“We had our share of controversy over the event,” acknowledges Gower. “We know that some residents felt it inconvenient that certain roads had restricted car use, but overall the feedback over the event was quite positive. And the road closures were limited to half a day. I’d say we were successful in raising awareness about a community service that is easy to take for granted.”

Despite this success, ICV will not be hosting a Car Free Sunday event for 2013. Instead, the group is using the Elevate the Arts event in downtown Courtenay to provide examples of creative uses of public space such as a temporary installation of a half pipe and a number of temporary ‘parking stall’ parks. ICV will also be providing an opportunity through the ‘Start Here’ community engagement arts project for residents to describe how their public spaces could be ‘enlivened’ to contribute to their quality of life.

‘Start Here’ is a community engagement project developed by CVAG in partnership with Imagine Comox Valley, the North Island College Fine Art Department, Highland Secondary, Elevate the Arts and a number of community animators. The highly interactive display will be housed at CVAG and uses a range of media to explore individual and group perceptions of the Valley. ICV will be contributing ‘Be Heard - Masked or Unmasked’, a videography opportunity that enables people to tell their stories. Participants are invited to sit in a tent where they have the option to wear a mask, and tell their story and vision for the Comox Valley to the video screen. Similar to a ‘speakers corner’, the installation provides a seemingly intimate space where imagination can let loose and visions are held. The ‘data’ from the entire ‘Start Here’ event will be used by ICV to create a multi-media presentation of a co-created vision that may be available at CVAG and other venues in the future.

“ICV saw a tremendous opportunity to harness the creative ideas from the community through the Start Here project,” says Pieter Vorster, board director of ICV. “Our organization’s mission is to help people re-imagine the Comox Valley as a truly sustainable place, for everyone. In order to help do that, we have to have a baseline ‘snapshot’ of what people care about in their community and what they think about on the day to day. Start Here will provide data for that snapshot.”

ICV intends to host a Car Free Sunday event in 2014 and will showcase the information that was collected during this year’s Elevate the Arts and ‘Start Here’ project.

This year on Saturday June 16th (Kitsilano) and Sunday June 17th/Father’s Day (Commercial Drive, Main Street, West End & Kitsilano), Car Free Day will also be taking place in Vancouver. You can find all the details on their Facebook page and the Car Free Vancouver Day website.