Downtown Courtenay is launching a new event this April 20th and the whole community is invited! Earth Day Downtown is a day-long celebration of local food and backyard gardening and a great way to celebrate good green living. Live music, kids’ art activities, local business events, vendors and local non-profits will all be part of the fun as the community celebrates earth-friendly choices in the heart of our urban core. 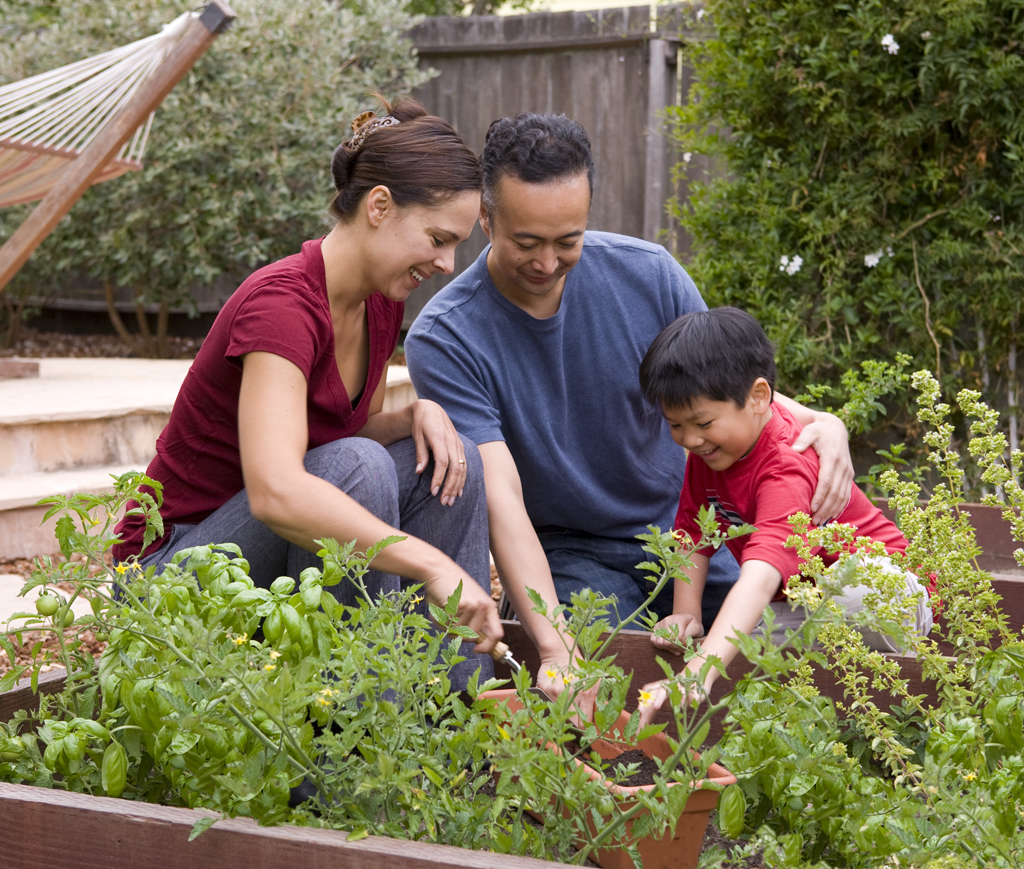 The DCBIA is welcoming a wide variety of vendors and community organizations downtown from 10 am till 3 pm. Vendors are offering everything from compost makers and compost product, mushroom kits, seeds, seedlings, trees and berry bushes, seed bombs, kids crafts and much more! Vendors and groups will be set up in the lot at the corner of 5th and England

Families are invited to come down and learn about gardening methods, chat with growers and farmers and get inspired for their own backyard farming activities. Community organizations are also joining the celebration and talking about projects and initiatives that support local food production, urban famring and healthy eating! 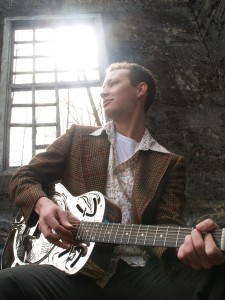 Live music and hands on art projects will add even more fun! Performers include Luke Blu Guthrie, Alan Jossul and Annie Becker, with more surprises yet to come. Earth Art Studio will be offering hands on earth day crafts for kids.

Local shops and restaurant are also getting in on the action! Beyond the Kitchen Door is hosting a special “Meet Your Maker” cooking demo with Chef Laura Agnew owner of As You Like it Catering. Chef Laura will be working with products from local food producers from noon till 4 pm including Abuelo’s (tortillas), Clever Crow Sea Salt and Spice Mixes, Eatmore Sprouts, Ironwood Farms (produce), Tree Island Yogurt, Simply Divine (honey) and Island Bison. 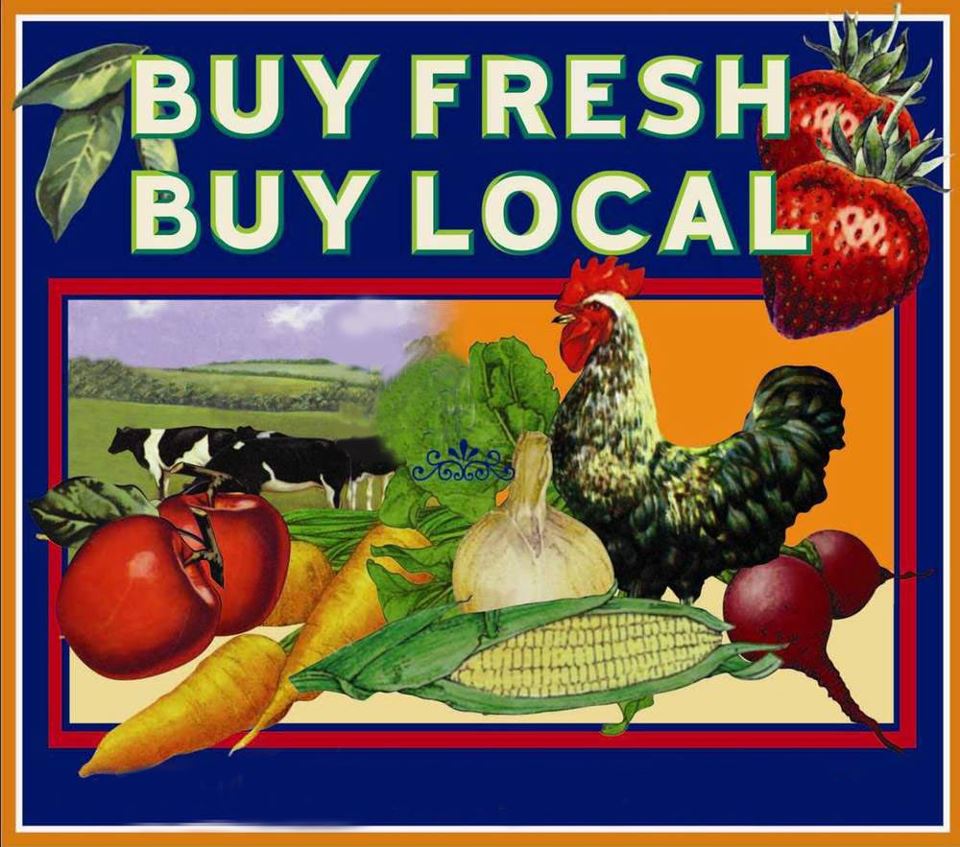 Earth Day Downtown is a reflection of the many ways that Downtown Courtenay is defining itself as a community destination as well as a retail one. “Visiting Downtown Courtenay has to be a ‘value added’ experience” says DCBIA President Mark Middleton. “We can’t always compete with pricing but we can always compete with personalized service, unique selections, atmosphere, quality and a strong sense of community.”

In fact, the development of strong community partnerships has been at the heart of efforts to add vibrancy to Downtown Courtenay. The DCBIA has taken on several exciting new initiatives over the past year. These include sponsoring the development of the innovative new Elevate Arts Festival, partnership with the local multi-cultural society on a Lunar New Year celebration, collaboration with the local Arts Council on Market Day and Local Colours, development of the new WinterFest Celebration and working with the BIABC, Fortis BC, and the Vancouver Island Aids Society to promote energy conservation and collect warm weather clothing for the homeless. 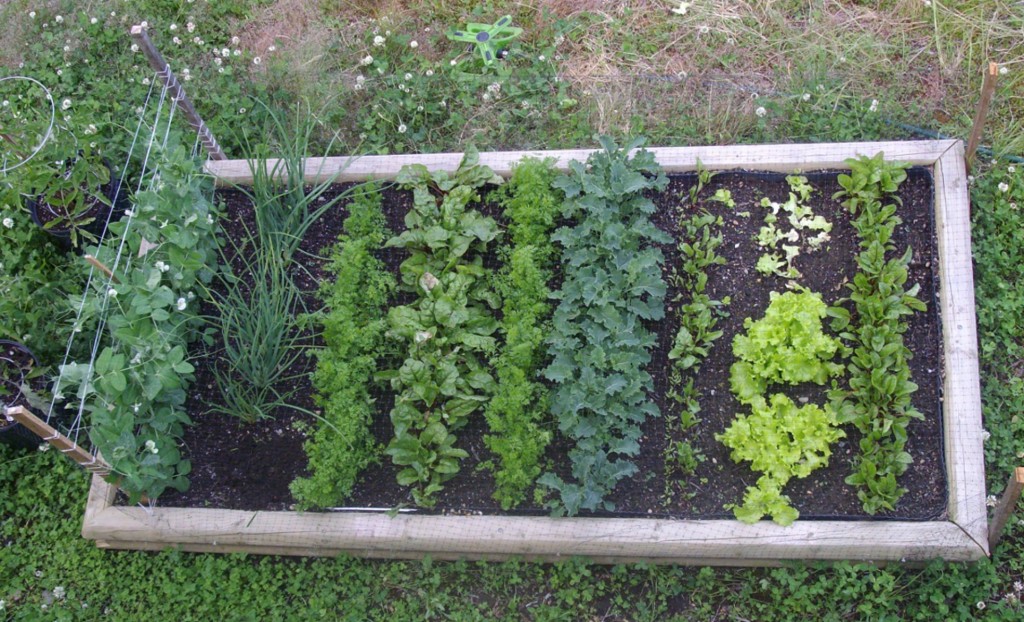 Through partnerships with the community the DCBIA is adding value to Downtown Courtenay for retailers, restaurateurs, visitors, shoppers and even residents of local neighbourhoods. These collaborations are powerful. Community partnerships create a ripple of awareness and participation as friends and families of community partners join the fun. Add to that the power of social media and Downtown Courtenay can have a competitive edge that can’t be beat!

For more information and updates on Earth Day Downtown you can check out the Downtown Courtenay Facebook page or www.downtowncourtenay.com

Something special happened last May in the streets of alleys of Downtown Courtenay. Seemingly out of nowhere, a grassroots arts and culture festival was born. With over 22 venues and over 250 performers and artists spread across alleyways, restaurants, plazas, halls and cafes, it was an event that certainly caught the attention and interest of the community. So much so that organizers have decided to do it all over again!

The Elevate Arts Festival is produced by a hardworking volunteer team of culture lovers and community unity builders and the event seems to have really hit a chord with the Comox Valley. For artists, businesses, musicians, performers and residents of all ages it created a new, free and highly accessible forum for celebrating diverse arts and culture. It also provided a much needed injection of energy and activity in our downtown core. 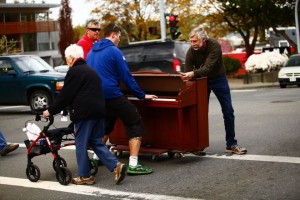 “We’ve been blown away by the incredible support and encouragement from all aspects of the community” says Elevate Co-Producer Bobby Herron. “That support has given us the momentum do it again.” And so, Elevate 2013 is set for June 4-8th in the ‘Heart of Courtenay’.

Elevate was unique in a number of ways and that has certainly been part of it’s appeal. The event is all about breaking down the barriers between culture producers and culture consumers and bringing audiences, supporters and artists together in their experience of arts and culture.

Instead of closing 5th street or booking a big field somewhere, Elevate was about the nooks and crannies of the community. Instead of big ticket prices, the event is about total accessibility. Instead of passive viewing and listening, the event is all about finding your own voice and your talents and engaging directly with artists. Instead of escaping from our day to day life, Elevate is about transforming our community into a place where creativity, experimentation and exploration is celebrated every day. 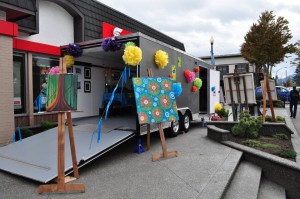 Elevate is also all about partnerships. Organizers have committed themselves to producing an event that provides a vehicle for many arts, culture and community organizations to express themselves, as well. Instead of multiple organizations competing for dates and audiences throughout the year, Elevate is dedicated to providing a collaborative forum for ‘elevating’ arts and culture.

“Elevate seems to have really piqued an interest”, says Co-Producer Anna Rambow. “The Comox Valley seems hungry for an event that is a bit more challenging and a bit more welcoming to alternative voices. We’re really committed to making sure that the diverse voices of our community are expressed in our programming. We’re also creating vending and exhibition opportunities for artists who have very ‘non traditional’ work through the Underground Art Fair. Many of these artists are not included in more traditional craft fairs.”

Organizers have been using a series of ‘E’ words as guiding inspiration for programming. “At one of our first meetings in late 2011 we came up with the name and a list of words that really represented what we were trying to achieve.” says Co-Producer Kera McHugh. “Explore, Experiment, Entice, Expose, Excite and Evolve are just a few. Whenever we try and figure out if an activity fits with our vision, we go back to the ‘E’ words.” 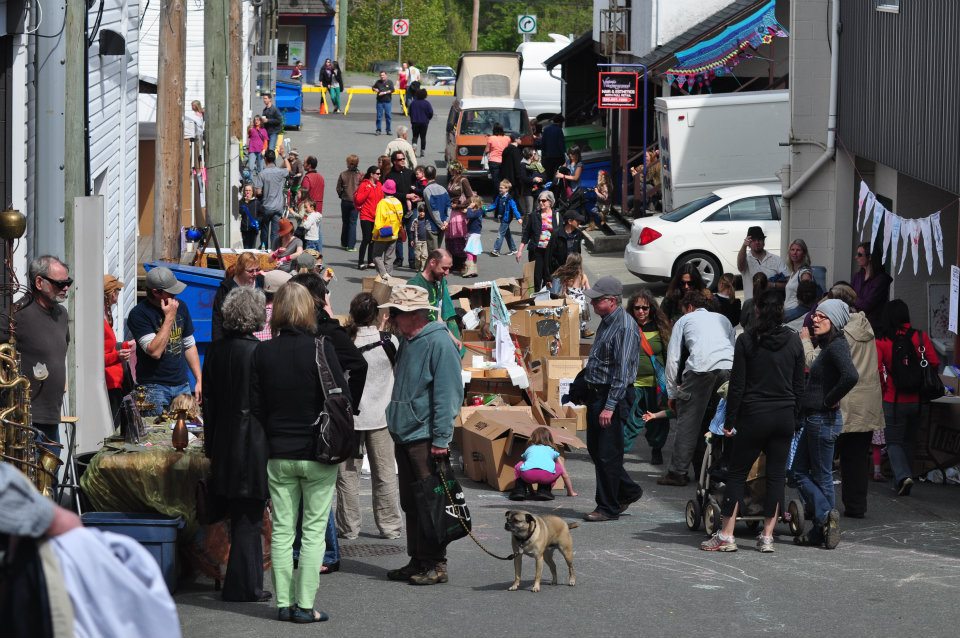 The Downtown Courtenay BIA, City of Courtenay, Comox Valley Art Gallery, Comox Valley Community Arts Council, Motif Music Studio and Imagine Comox Valley are already confirmed supporters and partners of the 2013 event. Artists, musicians, dancers, businesses and creators of all kinds have begun applying to be part of the fun by offering to perform, exhibit or champion projects. 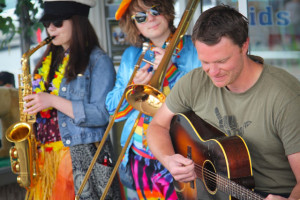 “We have plans in the works already for over 15 venues and locations and this number is growing like crazy!” says Bobby Herron. “We have an incredible amount of activity happening in Simms Alley including a music stage, participatory art projects, puppet shows and projections, circus arts and really unique vendors. We also have some really amazing programming coming together on local plazas and street corners and in several local cafes, shops and restaurants including Zocalo, Union Street Grill, Joe’s Garage, the Lower Elks, the Legion, Lower Native Sons, CVAG, Muir Gallery, Sid Plaza and more. The website is in a constant state of evolution, so check back often!”

What does this band of hardworking culture promoters hope to achieve?

“We really want to do something that makes a difference in the evolution of our community.” says Co-Producer Meaghan Cursons. “We need to be creative about how our community evolves; environmentally, economically, socially and culturally. I think we’re all really committed to contributing to a thriving, sustainable and creative Comox Valley. We have an opportunity to focus our energy on our downtown cores and create places where community comes together for a variety of activities - not just commercial ones. This is an alternative vision to the one that promotes big box stores, residential sprawl and more pavement. We want to re-imagine our downtowns as places where community happens, outside of our cars and away from our TV’s.”

There are lots of ways to get involved in the second annual Elevate Arts Festival. Check out their website for volunteer, sponsorship, venue and programming opportunities today at www.elevatethearts.com